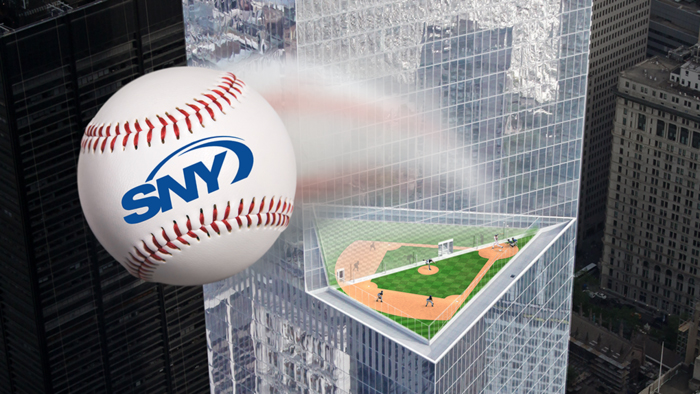 NEW YORK, November 9, 2015 – Silverstein Properties announced today that it has signed a 17-year lease with SNY for 83,000 square feet of office and studio space at 4 World Trade Center.  SNY, owned by Sterling Entertainment Enterprises, Time Warner, and Comcast NBC Universal, will move its Manhattan headquarters and relocate its broadcast studios from Midtown to the 49th and 50th floors of 4 WTC.

In addition, Sterling Equities and Sterling Project Development will join SNY at 4 WTC, establishing the location as their official Manhattan offices.

Fred Wilpon, Chairman, Co-Founder of Sterling Equities, said:  “This is a historic move, as 4 World Trade Center is the perfect home for SNY and Sterling.  Downtown has undergone a total transformation, at the World Trade Center, and we’re excited to be involved.”

The Downtown Alliance reports that 624 firms have moved to Lower Manhattan since 2005, leasing over 15 million square feet.  Of those companies, 350 have been in TAMI (Technology, Advertising, Media, Information) or professional services fields, taking 56 percent of the space leased.

Media companies that have recently moved Downtown include Condé Nast, Time Inc, HarperCollins, Macmillan, the New York Daily News and Broadcast Music, Inc.  In June 2015, Silverstein Properties signed a letter of intent with 21st Century Fox and News Corp to move their headquarters into 1.3 million square feet at 2 WTC.  The final tower planned for the 16-acre World Trade Center site is being designed by Bjarke Ingels Group and will open in 2020.

Janno Lieber, President of World Trade Center Properties, said: “SNY is going to broadcast from 4 WTC and use this place to shape its identity the way other media companies have used Rockefeller Center or Times Square.  The new World Trade Center is fast becoming perhaps New York’s most iconic location.”

Late last year, Silverstein successfully financed and re-started construction on 3 WTC.  The Richard Rogers-designed 80-story tower is currently at the 52nd floor, will top out towards the end of 2016, and will open in early 2018.  GroupM, the world’s leading media investment management group, has signed a 20-year lease for 515,000 square feet on nine floors at the base of the building.

Designed by Pritzker-prize winning architect Fumihiko Maki to meet a LEED Gold standard of sustainability, 4 WTC is a model of transparency and efficiency.

4 WTC was designed to enliven and seamlessly integrate into Downtown’s streetscape, with a major concentration of retail – both at the street-level and in underground pedestrian concourses that lead directly to 11 subway lines and the PATH trains. 400,000 square feet (37,161 square meters) of destination retail will open in tandem with the World Trade Center Transit Hub in 2015.

Currently, the firm has $10 billion of development underway including Four Seasons Downtown New York Hotel and Private Luxury Residences, One West End and 2 and 3 World Trade Center.  In addition, SPI is focused on joint ventures for development and acquisitions in Europe, Asia and Israel.  The company has been recognized as one of the “Best Places to Work in New York City” by Crain’s New York Business for the past eight years.

For further information on Silverstein Properties, visit www.silversteinproperties.com or www.wtc.com.