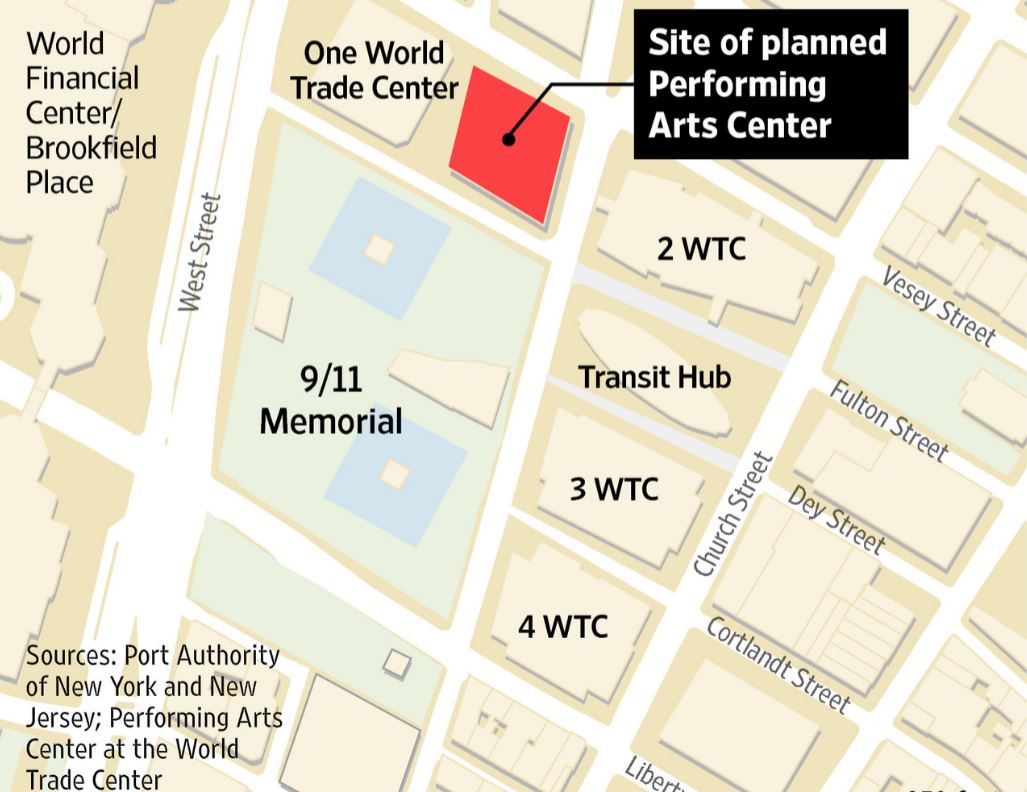 NOVEMBER 20, 2015, NEW YORK, NY: PACWTC Chairman John Zuccotti and President/Director Maggie Boepple today announced the selection of the Brooklyn-based firm REX as the lead architect for The Performing Arts Center at the World Trade Center. Scheduled to open in 2019, PACWTC will serve as a major new addition to New York’s cultural landscape, producing and premiering works of theater, dance, music, musical theater, opera, and film, as well as productions that cross multiple disciplines. The roughly 80,000 square-foot building, which will incorporate leading edge technology, will also serve as a home for the Tribeca Film Festival during its annual run.

The selection of REX follows last week’s re-affirmation of support for the PACWTC by the Lower Manhattan Development Corporation (LMDC), which released the first $10 million of the $99 million that the LMDC has pledged to the project. The balance of the project cost – which will be determined once the design process is complete – will be funded through private sources.

“The selection of REX and the LMDC’s renewed commitment are critical milestones in our collective effort to create a vibrant new cultural and community anchor for all of Lower Manhattan,” said Zuccotti. “We are now two important steps closer to completing the World Trade Center and fully realizing our vision of Lower Manhattan as the world’s most dynamic, 24/7 urban community.”

REX, led by Joshua Prince-Ramus, was selected after a rigorous invitational process that focused on architectural firms that have gained distinction through their celebrated work on performing arts houses. The three finalists were: Henning Larsen (Denmark), UNStudio (The Netherlands), and REX (United States). REX’s internationally praised work includes the Dee and Charles Wyly Theatre in Dallas, the Vakko Fashion Center in Istanbul, and the Seattle Central Library, for which Prince-Ramus was partner-in-charge when he was associated with OMA New York.

Noted Boepple, “Throughout the architectural selection process, REX presented us with an inspired vision. Joshua totally blew us away with his innovative ideas about how to present cutting-edge culture, but also about how to make the PAC relate to everyone who comes to the WTC site – workers, residents, and visitors. The team we have assembled – REX, Davis Brody Bond, Charcoalblue, and DBI – are all leaders in their fields, and we know that we are in good hands. New York City will have soon a brilliant cultural facility in the heart of Downtown Manhattan.”

“We are honored to design such a meaningful project on a site imbued with deep significance for the people of New York,” said Prince-Ramus. “I am confident that our collaboration with PAC’s exceptional team will help create a building that embodies and inspires the many dimensions of creative expression.”

“Today is a great day for Downtown as the PAC has chosen an experienced design team to create a marvelous international center for the arts and our community,” said Catherine McVay Hughes, Chair, Manhattan Community Board 1.

About The Performing Arts Center at the World Trade Center

The Performing Arts Center at The World Trade Center will be a global center for the creation and exchange of art, ideas, and culture that will welcome audiences, artists, residents, workers, and visitors alike.

PACWTC will be a hub for the Lower Manhattan community to enjoy, day and night. It will present a diverse variety of artistic and cultural experiences as well as places and ways to meet, play, collaborate, eat, and drink.

Vibrant with energy, intelligence, insight, and pleasure, PACWTC will make profound connections. It will bring big ideas, deep emotions, and unforgettable artistic experiences to the renewed Lower Manhattan neighborhood and beyond.

REX is an internationally acclaimed architecture and design firm in New York City. Seminal projects include the Dee and Charles Wyly Theatre in Dallas, Texas; the Vakko Fashion Center and Power Media Center in Istanbul, Turkey; and the Seattle Central Library. REX is led by Joshua Prince-Ramus, who was the founding partner and principal of OMA New York, until he rebranded the firm as REX in 2006.

The firm is currently working on the Mercedes-Benz Future Lab in Stuttgart, Germany, a public showcase for the brand’s impact on state-of-the-art mobility and a factory for creating, debating, and presenting the indeterminate future; a new office building in Washington, D.C. that will host CBS’s Washington Bureau, among other tenants; a 38,000 sf private residence on Long Island; and the recladding and interior renovation of Five Manhattan West, a Brutalist landmark straddling Penn Station’s rail yard in New York City. Within the past few years, REX was also declared winner of a limited competition for a $480 million, 80-story tower in Kuala Lumpur, Malaysia.

The work of REX and Joshua has been recognized with the profession’s top accolades, including the $100,000 Marcus Prize, bestowed upon architects “on a trajectory to greatness,” two American Institute of Architects National Honor Awards, a U.S. Institute for Theatre Technology National Honor Award, an American Library Association National Building Award, and two American Council of Engineering Companies’ National Gold Awards. The Vakko project was nominated for the 2013 Aga Khan Award, and the Seattle Central Library was a finalist for the inaugural Mies Crown Hall Americas Prize, awarded in 2014 to the best architectural work in North and South America completed from 2000 to 2013.  www.rex-ny.com

Davis Brody Bond is among the nation’s leading design firms. Known for innovative solutions to complex design challenges, the firm’s work includes cultural, academic, research, and commercial buildings that strive to elevate the public realm in a diverse range of settings and locales. Since its founding in 1952, Davis Brody Bond has worked with many of New York City’s most important civic institutions and recently completed the National 9/11 Memorial Museum in Lower Manhattan.

The firm has been honored with more than 200 major design awards including the American Institute of Architects Firm Award, the highest honor given to an architectural practice, as well as the Presidential Award for Design Excellence. With offices in New York, Washington, DC, and São Paulo, the firm is led by five partners who work closely with their clients while directing a team of architects, planners, and designers.

Established in 2004 by Andy Hayles, Gavin Green and Jon Stevens, Charcoalblue is the largest and most exciting organisation of its kind working in Britain. Responding to growing interest from around the world, they continue to grow their innovative theatre, acoustic and digital consultancy service, working from their offices in London, Bristol New York and Melbourne.

Charcoalblue’s extensive portfolio of clients ranges from world-famous UK companies like the Royal Shakespeare Company, the National Theatre and Glyndebourne Festival Opera, to household US companies such as St. Ann’s Warehouse in Brooklyn, Chicago Shakespeare Theatre, Steppenwolf and Baltimore Centerstage.

Their unique collaborative approach and relentless attention to detail has won them awards, ecstatic reviews from the theatrical and architectural press and, most importantly, praise from their theatres’ performers, technicians and audiences.

Charcoalblue is humbled and proud to be the theatre consultant for this amazing project with this world class team.

DBI Projects is a multidisciplinary firm that specializes in development management, project management, and real estate advisory services for a diverse range of non-profit, private, and city clients.  Since its founding in 2002, DBI has executed, managed, or consulted on over $10 billion of projects with a focus on the cultural and educational sectors.