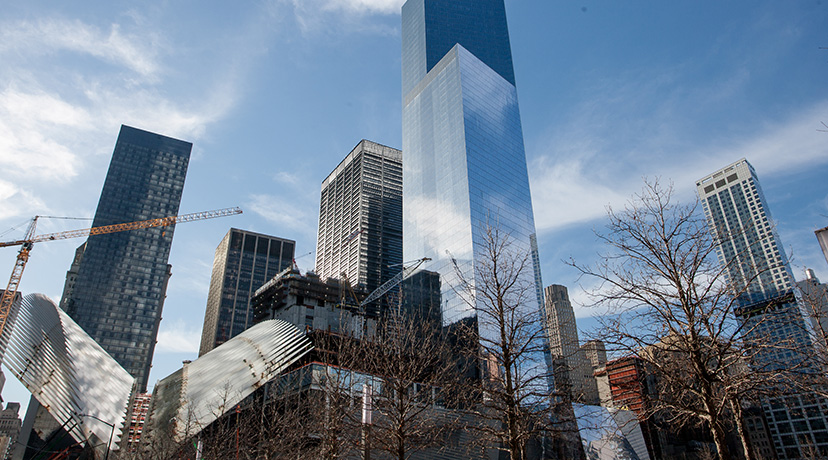 As Oculus at World Trade Center Opens, So Does a Neighborhood

This will give the public its first glimpse of a majestic and luminous space — framed by soaring, softly curving white ribs and the ribbons of light between them — that looks like nothing so much as the nave of a cathedral by Gaudí.

Or like a turkey skeleton after it’s been stripped clean at Thanksgiving.

The debate over the $3.9 billion World Trade Center Transportation Hub, of which the Oculus is the aesthetic and retail centerpiece, is only beginning. Love it or hate it, however, there is no denying its magnitude.

The public will have a chance to study the interior of the Oculus from a north-south passageway that is to open next month (or perhaps earlier), linking the PATH platforms to new entrances at Vesey and Liberty Streets.

Progress at ground zero was once measured in years. This spring and summer promise one milestone after the next, sometimes separated only by days.

Once the new arteries are open at the hub, commuters will come up into the east half of the PATH mezzanine.
Credit Sam Hodgson for The New York Times

On Tuesday, a 25-foot-wide section of sidewalk opened on the north side of Liberty Street, between Church and Greenwich Streets, the scene of frequent pedestrian bottlenecks. It is a heavily trafficked route to the National September 11 Memorial and Museum and, increasingly, to the 4 World Trade Center tower as it fills with office workers. People live on Liberty Street, too.

Catherine McVay Hughes, the chairwoman of Community Board 1, said the new sidewalk was something people in the area, “especially the local residents who returned after 9/11, have been looking forward to for a long time.”

On Thursday, the Port Authority plans to open the second of four new snow-white, marble-floored PATH platforms designed by Mr. Calatrava and his colleagues in the Downtown Design Partnership.

At the same time, workers are to remove a temporary floor-to-ceiling barrier in the PATH mezzanine directly above the platforms, creating a broad perspective on the space, which looks like the inside of some fantastically large (but immaculately clean) marine organism.

On May 29, the One World Observatory is to open atop 1 World Trade Center.

Soon after, the north-south passageway between Vesey and Liberty Streets will open, “improving access and transportation connections for the residents, workers and visitors to Lower Manhattan,” said Patrick J. Foye, the executive director of the Port Authority of New York and New Jersey.

From below ground, commuters will be able to see the Oculus in the hub as passageways at the center open to pedestrians.
Credit Sam Hodgson for The New York Times

Construction staging has been particularly challenging since the authority sought to maintain service for 50,000 daily PATH commuters and those on the No. 1 subway line, Erica Dumas, a Port Authority spokeswoman, said.

PATH commuters from New Jersey currently use a temporary station on Vesey Street that will be demolished in the coming months. Intense human traffic jams have resulted, as PATH riders scramble among residents and office workers who are heading to and from Battery Park City, and everyone shoulder-butts tourists.

“Vesey Street has not been for the faint of heart,” said Jessica Lappin, the president of the Alliance for Downtown New York.

In the new arrangement, riders will come up into the east half of the PATH mezzanine, which is the transportation crossroads of the hub. Then they will walk under the No. 1 line, which crosses the vast space without any visible means of support, in a remarkable — and expensive — bit of engineering.

Commuters will then enter the Oculus along its perimeter, protected from construction by plywood barriers. Fortunately, there is a see-through, mesh clerestory running the length of these barriers.

“It’s for ventilation,” Glenn P. Guzi, a program director of the Port Authority, said as he led a tour through the passageway. “But the icing on the cake is that people will be able to see the Oculus as we’re moving forward.”

The public will soon have its first glimpse of the Oculus, a majestic and luminous space — framed by soaring, softly curving white ribs and the ribbons of light between them. Credit Sam Hodgson for The New York Times

The passageway is planned mostly for PATH commuters. But it is easy to imagine it as a prime destination for architectural sightseers, at least until the Oculus is open in its entirety late this year or early next year.

Together, these changes will enable pedestrians to walk the length of the World Trade Center site for the first time since Sept. 11, 2001.

“You have simultaneously, both aboveground and below, the opening and widening of essential arteries,” Ms. Lappin said.

Ms. Hughes, the community board chairwoman, said neighbors were “thrilled that there will be a north-south connector through four city blocks.”

“This is another key milestone of the reincorporation of the World Trade Center into the fabric of Lower Manhattan,” she said.