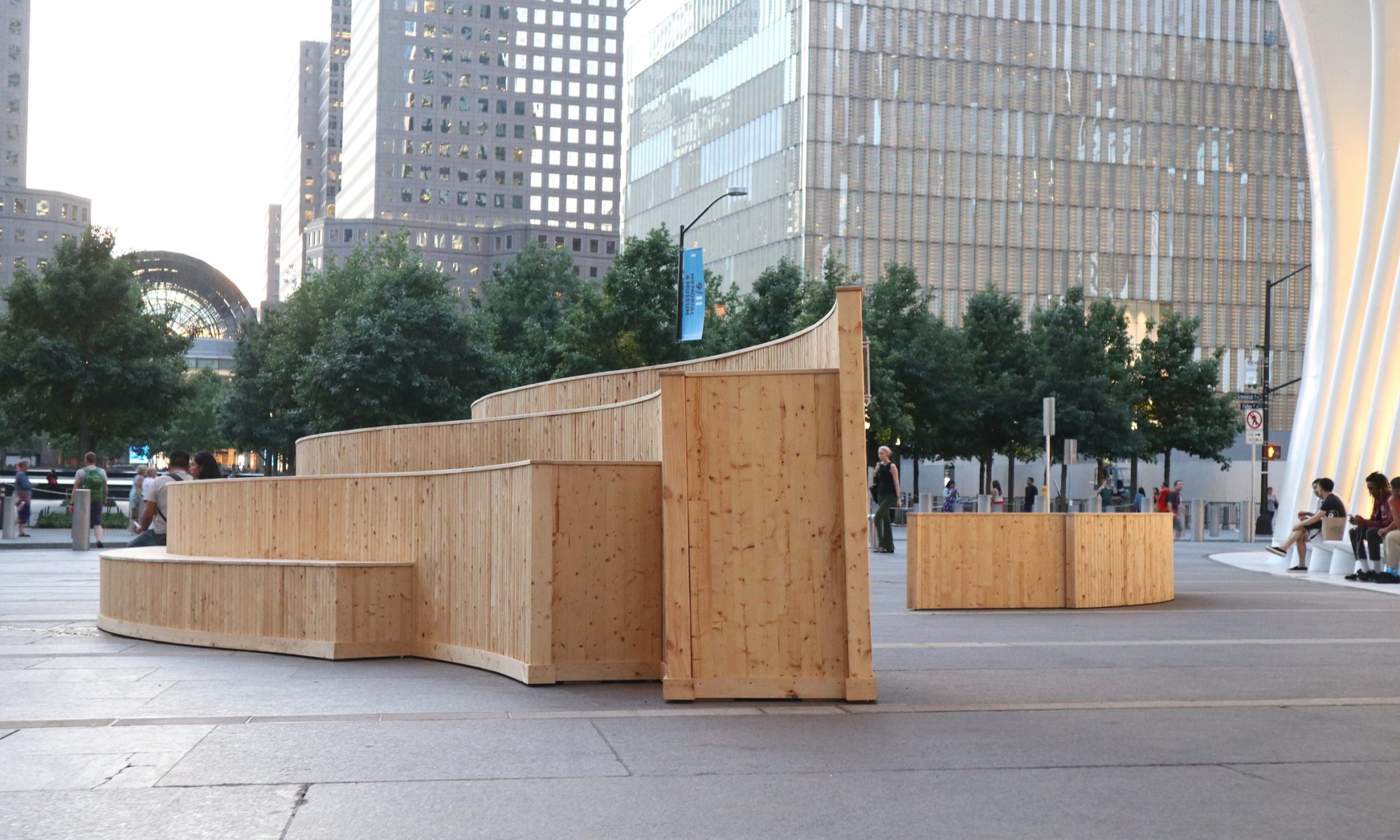 The World Trade Center’s Oculus Plaza seems like the last place you’d find a living rice paddy, but there it is, set right into an undulating plywood planter box. A collaboration between the Port Authority of New York and New Jersey and lifestyle brand LUCKYRICE, the new installation aims to draw our attention to the importance of grain, the most widely consumed food product in the world.

Located in the heart of Manhattan, this living exhibit is modeled on the terraced paddies of Asia, which supply 90 percent of the world’s rice. Green leaves sprout up from three tiers of paddies, which are expected to produce five varieties of rice during one four-month growing season. It will remain in place through the Harvest Moon Festival in late September, according to officials, and the September 28th finale will feature dozens of chefs preparing special dishes with the rice grown on site.

The installation also shares a spirit of remembrance and renewal with the site, which itself famously contained the original Twin Towers before the terrorist attack of September 11th, 2001. The 16-acre World Trade Center campus is now home to the 9/11 National Memorial and Museum, along with three towers hosting 35,000 office workers. On top of that, millions of international visitors pass through the Oculus Plaza each year.

“Rice paddies are a common sight in Asia, yet foreign to many New Yorkers,” says LUCKYRICE founder and CEO Danielle Chang. “Our public art installation follows small rice seedlings as they go through the life-giving transformation that feeds much of the planet and that symbolized luck, fortune, fertility, and global connections through culture and food.”

The curved wooden planters of the paddies double as seating, and across their backs visitors can find facts about rice. The five varieties of rice growing inside them include Purple Jamon Upland Rice from Italy, Mamoriaka Upland Rice from Madagascar, Yukikihari Lowland Rice from Japan, Amaura Upland Rice from Uzbekistan, and Carolina Gold Rice from the United States. While the seedlings are very small now, they’ll grow up to four-and-a-half feet tall by late September.

The Rice Paddy installation is just the latest “community activation” to be staged in Oculus Plaza as part of the Port Authority’s plan to provide cultural, educational,and entertaining programming.

“The Port Authority has invested billions of dollars rebuilding this sacred site and takes its continuing stewardship of the nearly completed campus very seriously,” says Port Authority Chairman Kevin O’Toole. “We welcome unique displays and activities to this campus such as LUCKYRICE that will provide the downtown community and those who work here with a family-friendly environment that will be a dynamic destination for tourists from around the world.”

The installation was produced by a team of local and multicultural New Yorkers and minority, women-owned businesses, and was specifically designed to foster community engagement, according to its creators. It’ll also host school tours, culinary demonstrations, and multicultural public art talks throughout the summer. To learn more about the programming and the people involved in the project, be sure to check out the LUCKYRICE website.