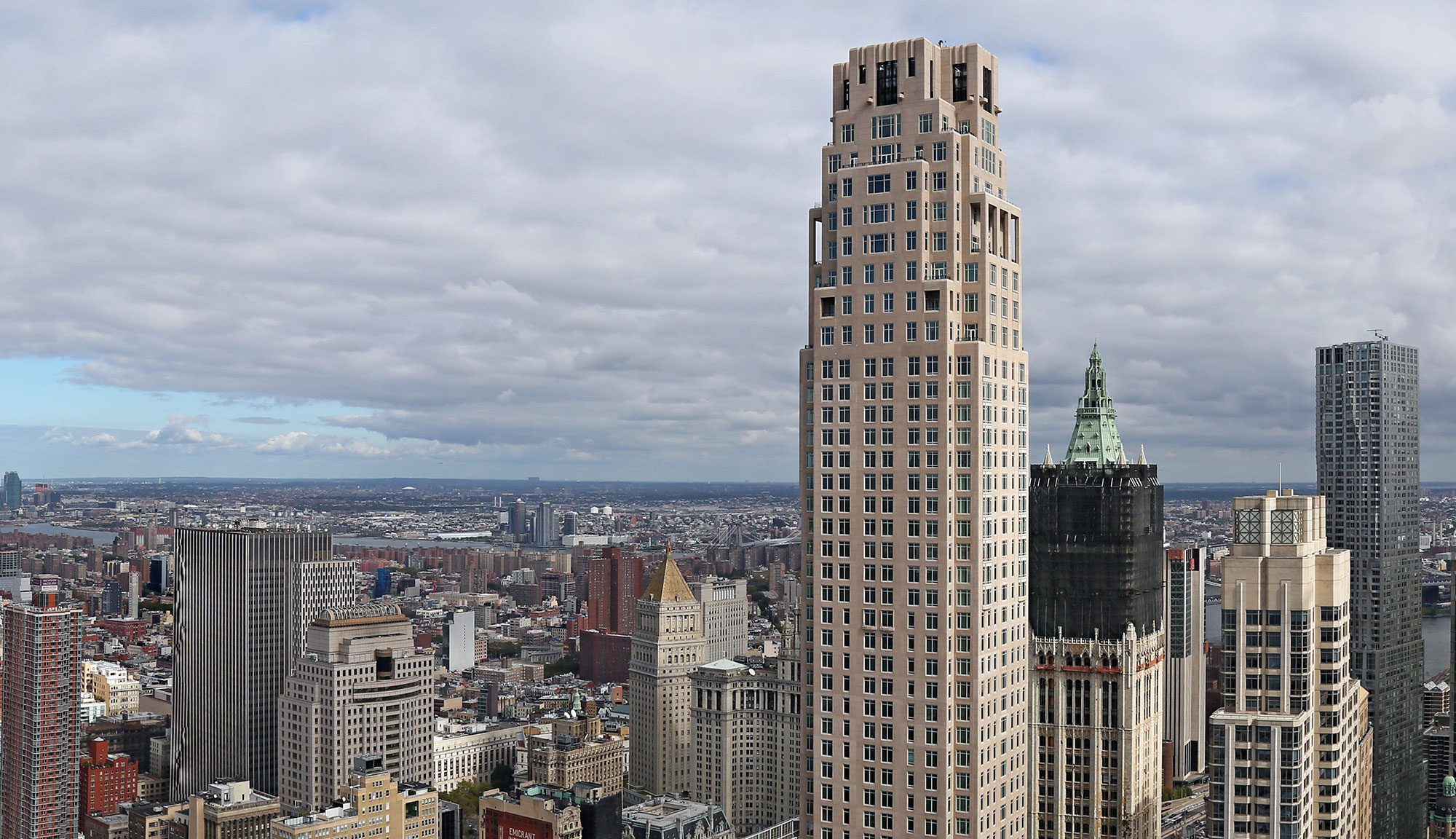 Located at 27 Barclay Street, the hotel occupies the bottom third of the 926-foot, 82-story tower.  Known for its five-star services, experiences, and amenities, Four Seasons Hotel New York Downtown is also home to CUT by Wolfgang Puck, the celebrity chef and restaurateur’s first and only New York restaurant.

Mr. Silverstein said, “The opening of Four Seasons Hotel Downtown is the capstone on a banner year for Lower Manhattan.  This year we opened the World Trade Center transportation hub, along with dozens of new shops and restaurants.  Downtown has fully returned as a premier place for business, and visitors are coming to Lower Manhattan in record numbers.  In addition, the residential neighborhood around us has become a model of what is best and most exciting about New York.”

Four Seasons Hotel New York Downtown offers Downtown’s growing business and visitor communities a high level of service and style unique to the area. The Hotel consists of 185 rooms designed by Yabu Pushelberg, the restaurant, bar, full-service spa and health club with pool. Over one-quarter of the hotel rooms are suites, including a 3,700-square-foot royal suite.

“This is a remarkable hotel, one that draws inspiration from the vibrant architecture, culture and energy of Lower Manhattan, capturing the spirit of this dynamic and evolving neighborhood,” said J. Allen Smith, President and CEO, Four Seasons Hotels and Resorts. “We are proud to partner with Silverstein Properties in bringing Robert Stern’s world-class vision to life and are excited to welcome New Yorkers and the world to Lower Manhattan to experience luxury hospitality, Four Seasons style.”

The tower shares a city block with the Woolworth Building, Cass Gilbert’s iconic 1913 skyscraper. With its limestone base and cast stone shaft that rises to a dramatic skyline profile of full-floor penthouses and setback terraces, the new tower has already become a distinctive landmark on the city’s iconic skyline.

“Silverstein Properties, and Larry Silverstein in particular, encouraged us with his promise to restore Downtown to its past glory,” said Robert A.M. Stern, Founder and Senior Partner of Robert A.M. Stern Architects. “By combining a great Four Seasons hotel with luxury apartments, 30 Park Place is an active participant in the life of the city, significantly adding to the return of Downtown to its historic role as New York’s great neighborhood.”

The hotel entrance at 27 Barclay Street leads visitors into four floors of lobbies, lounges, the CUT restaurant and bar, ballrooms, and meeting facilities, as well as a spa, fitness center and pool. The restaurant also has a direct entrance at 99 Church Street.  A through-block landscaped public plaza is located on the hotel’s eastern side, framed by a lower annex building that conceals building services and access to below-grade parking.   Residents benefit from a private entrance and lobby at 30 Park Place.

The residences at 30 Park Place include 157 luxury condominiums, some as large as 6,500 square feet. Amenities include a 75-foot heated indoor pool, fitness center, lounge area, and children’s room.  Silverstein Properties has sold over 75% of the residences.

According to the Downtown Alliance, the neighborhood’s residential and hotel stock have increased dramatically in the past five years.  Over 3,500 new residential units and 2,200 new hotel rooms have opened. An estimated 14.2 million unique visitors came to Lower Manhattan in 2015.

“Four Seasons provides an exclamation point to the ongoing renaissance of Lower Manhattan,” said Jessica Lappin, President of the Alliance of Downtown New York. “Silverstein Properties’ latest estimable contribution to the area’s rebirth provides a world class accommodation for visitors, superlative dining for everyone and unsurpassed luxury at its residences.   Four Seasons is yet another reason it’s clear that Down is What’s Up.”

Currently, the firm has $10 billion of development underway including One West End and 2 and 3 World Trade Center.  In addition, SPI is focused on joint ventures for development and acquisitions in Europe, Asia and Israel.  The company has been recognized as one of the “Best Places to Work in New York City” by Crain’s New York Business for eight years in a row.

ABOUT FOUR SEASONS HOTELS AND RESORTS

Founded in 1960, Four Seasons continues to define the future of luxury hospitality with extraordinary imagination, unwavering commitment to the highest standards of quality, and the most genuine and customized service. Currently operating 99 hotels, resorts and residences in major city centers and resort destinations in 41 countries, and with more than 50 projects in development, Four Seasons consistently ranks among the world’s best hotels and most prestigious brands in reader polls, traveler reviews and industry awards. For more information and reservations, visit fourseasons.com. For the latest news, visit press.fourseasons.com and follow @FourSeasonsPR on Twitter.

Robert A.M. Stern Architects, LLP, is a 320-person New York-based firm of architects, interior designers, and supporting staff. Over its forty-seven-year history, the firm has established an international reputation as a leading design firm with wide experience in residential, commercial, and institutional work. As the firm’s practice has diversified, and its geographical scope has widened to include projects in Europe, Asia, South America, and throughout the United States, it has completed a series of record-setting New York apartment houses that have attracted international attention. The firm maintains an attention to detail and commitment to design quality which has earned international recognition, numerous awards and citations for design excellence, including National Honor Awards of the American Institute of Architects, and a lengthening list of repeat clients.

Located in Tribeca at the corner of Church Street and Park Place, the 82-story tower offers 157 residences in a mix of one- to six-bedrooms. Eleven unique half and full floor penthouses crown the top of the building, each including fireplaces and outdoor space. Homes are thoughtfully designed to take advantage of breathtaking views and boast highly curated top of the line finishes.

Residents will also enjoy exclusive access to the Four Seasons Director of Residences and dedicated residential concierge, as well as a 24-hour doorman, bellman and service staff focused on providing the bespoke services for which the brand is known.  Tailored à la carte services are available to residents including in-residence dining and catering, housekeeping, grocery and flower provisions, car service and personal, child and pet care.